Posted by candacebattig on June 10, 2017 in Journey Updates, Recipes

I haven’t much to say this post. Only to remind you that the moon is full and bright in the sky. I witnessed it this morning as it disappeared into the mirage of the sun’s sky. The scientist in me discards it as a normal celestial occurrence while the dreamer in me sees it as a metaphor of the ying and yang of life – seemingly opposite forces that in reality are complimentary, interconnected and interdependent, unable to exist without one another.

Back to the real world, I’ve attempted to culture an Argentinian sourdough. How do you do that you might ask – well you take a clean sterile jar and mix water and flour into a soupy paste. Then leave it on your counter with a screen over top to keep out unwanted bugs and wait for the yeast in the air to naturally culture themselves in it. You’ll know they’re there when you start to see bubbles. If on the other hand you start seeing a white or green blanket forming on the top, toss it, you’ve got mold. Once the culture bubbles feed it some flour and stir it (maintain the same consistency by adding some water). Next you put the lid on it and put it in the fridge. You have to feed it flour every week and you have to use/discard part of the mixture every week to keep it alive. I usually use it in conjunction with dry active yeast the first 3 weeks to ensure the dough will rise sufficiently. This is because the sourdough culture isn’t strong enough yet and won’t raise your bread as much as you might want. I’ve had my culture for a month now and it’s doing alright. I found for me it works best to kneed the bread at night and then leave it to rise overnight and bake it in the morning. I find if I don’t give it at least 6 hours I make bricks instead of bread…. That said you could also just go to your local bakery and buy a delicious loaf of sourdough. Those bakers actually know what they’re doing and make enough sourdough to make it easy to replenish their culture and keep it very healthy, however I like playing with my microscopic pets. I also have some fermenting cabbage and ginger but I will save those for another post. 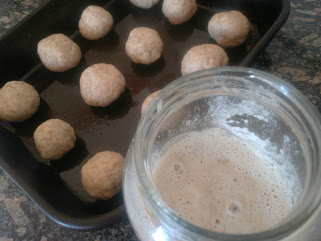 Lastly, this year I’ve taken up a regime of daily meditation and I’ve been using Jiddu Krishnamurti’s The Book of Life for inspiration. It contains 364 meditation’s for each day of the Gregorian calendar. His penning for the date of June 9th particularly resonated with my intention to meditate so I’ve included it below. Sat Nam